This post is totally un-quilty, doll or family related. It is a confession about my TV watching obsession this year. I started watching a British series, The Midsomer Murders on Netflix. I thought it would be about murders in England that took place in the summer. Wrong! Midsomer is a geographic location with many, many murders, using a variety of methods and weapons.
There are over 100 episodes(I've watched most of them) with at least a couple of murders in each and sometimes 2 or 3. The series started in 1997 and still continues. It's kind of like a car wreck--you can't take your eyes off!

I learned many things from this series.
1. For a quiet little country side, there are an awful lot of psychopaths running around committing murders, using a wide variety of methods and weapons! My favorite weapon was a pair of tailor shears. I own two pair. Impressive aren't they! The murderer, in that instance, used the scissors open as in the pic and sliced both sides of the victim's neck. Yikes! 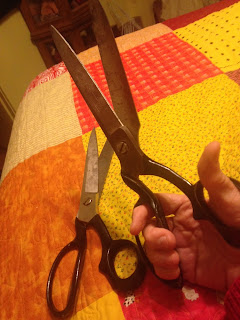 2. It can be very confusing living around there! You never know when a long lost brother, sister, or father might show up. You never know when a girl or boy friend might turn out to be a sister or brother! There were also many cases when a sister or a brother turned out to be totally unrelated. The funny thing was, though, no one seemed very surprised. Mistresses were common and often not a secret. You kind of needed a score card to keep up with all the various affairs. A very interesting neighborhood!

3.  I learned a lot about past times of the Midsomer country side. The murders revolved around golf, croquet, cricket, chess, football, theater, fox hunting and many more. Very educational!

4. I recognized many of the actors from Downton Abbey, Last Tango in Halifax, and other British shows. Some well known actors such as Colin Firth and Orlando Bloom were in it. My very favorite was Hayley Mills , who was a favorite of mine when I was a kid. I was afraid there for awhile that she was the murderer, but she wasn't. Whew!!!!!! That was a relief!

I feel like I just confessed to being hooked on a soap opera!  Well, there are still a few episodes I haven't watched so I guess I'd better run! I'll take my scissors and settle in.

Katkat
I am a retired special education teacher with 1 husband of 43 years, 3 sons, 1 daughter in law and 4 grands. I have always loved "making things", fabric being my favorite medium. About 24 years ago I discovered quilting and that took over my creative life. I'm a tye-dyed baby boomer and I want to share my journey as I begin my 65+ adventure. I want this to be my best chapter yet! Want to come with me?